Gallows Humor has been performing on the SoCal, Las Vegas, and Arizona Faire circuits for over a decade. We have an act that’s not to be missed, including spooky, macabre, comedic, as well as adult themes and we are best understood live and in person. If needed, we will always tone it down for non-NC-17 stages as we have dozens of “Family Friendly” songs we perform as well. Lyrics, albums, and videos are available on our webpage to give an idea of who we are.

For the Faire, we bring more than just stage performance, with a Faire guild we provide a unique experience for patrons as well. We typically camp, and bring our “guild hall” for the guild Romale Strigoi (attached to Gallows Humor), to add atmosphere.

Thank you for considering us!

Please contact us here for any questions or booking information. For band questions, email Mat Greaves at manager@gallowshumorband.com or call Mat directly at 626-485-6779.

Gallows Humor is a macabre, comedic, and energetic Romani-style folk/rock band. They perform bawdy, family-friendly, traditional Romani songs and original songs. Gallows Humor has a twisted bent to all of their performances. They love to crack jokes as they laugh at death and the morbid. Renaissance Faire appropriate and they’re always in character ready to party!

Gallows Humor has been performing on the SoCal, Las Vegas, and Arizona circuits for over a decade. They have an act that’s not to be missed including spooky, macabre, comedic as well as adult themes.

The performers in Gallows Humor are all accomplished musicians. Marian von Gogu who has previously performed with belly dance troupes, plays the bouzouki, guitar, accordion and other instruments, as well as composing the majority of the original songs for Gallows Humor. Uncle Rasputin has played the bass in Gallows Humor since its inception, as well as in other bands and following bands since the 1970s. Gregor previously performed with I.M.H.O. and the Eben Brooks Band, and is a master of the acoustic and electric guitars. Pitor has played the English Concertina for over 15 years, is skilled at improvisational harmonies and also plays with the sea-shanty, pirate styled band, Cutthroat Reef.

Additional Material for Long Bio
Gallows Humor is an “undead Romani Band” created by Mat Greaves in 2009. He developed an idea over many months to start the band, writing music and developing an act to go with it. He got his first chance as an “in-between sets” act at a Belles of Bedlam Halloween show at the Brit’s Pub & Restaurant in Pasadena, CA. Taking the persona of Romani gypsy “Marian Von Gogu”, Mat sang songs of necrophilia, cannibalism and drinking absinthe to the crowd, who loved every minute of it. Early versions of Gallows Humor classics “Necrodance,” “Don’t Judge Me” and “Blue,” all debuted that night. Gogu (Greaves) then set out to find other like-minded musicians to flesh out his undead crew.

Gallows Humor went on to play the Renaissance Faire circuit alongside the Sportive Tricks, the Dread Crew of Oddwood, Cutthroat Reef, Davey Tankard, Nightengale and the Belles of Bedlam. Not content to be just a Ren-Faire group, they also booked gigs at wine bars, restaurants and the world famous Whiskey-A-Go-Go in Los Angeles, who asked them back to play several times. 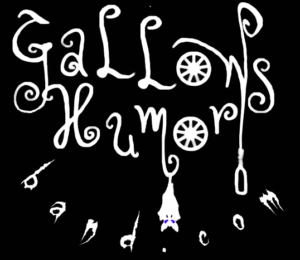 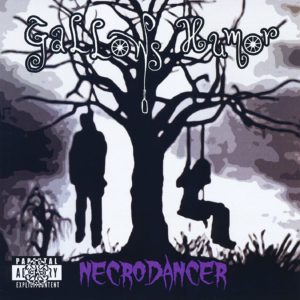 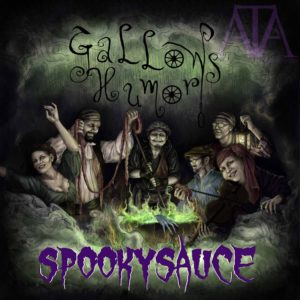 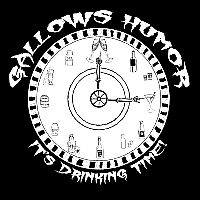 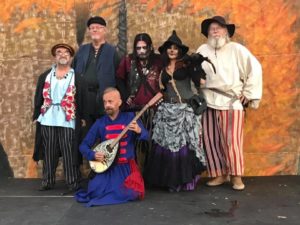 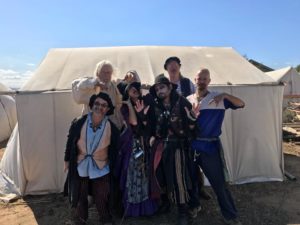 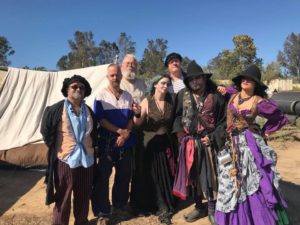 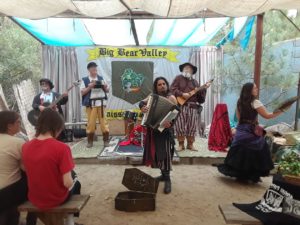 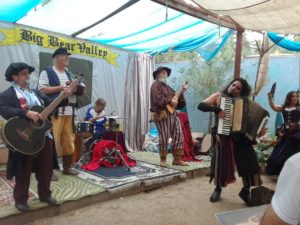 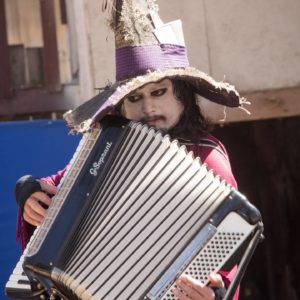 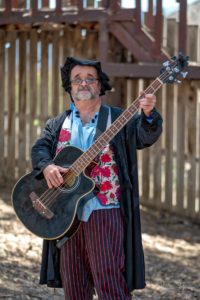 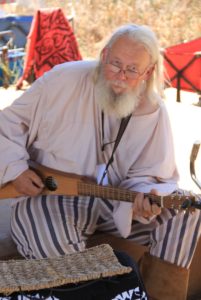 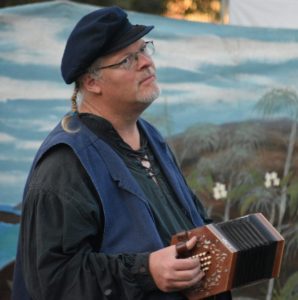 Stage Space: We fit best on a stage 15′ deep by 15′ wide. Request 1 chair. If not available, please advise.

Power Requirements: For close-up performances can be unpowered. If power is provided for larger venues we can use it and can work with sound engineers for a full mic, full electric, fully amped experience. ONLY if previously requested, we can provide speakers, mixer, mics, etc.

Camping Requirements: We can use up to 50’x50′ of available camping space, with approximately 25’x10′ for our guild hall if camping for the full Faire presence. If space is tight, please advise ahead of time for planning. If electricity is available, can use, but isn’t required.

We request being as close to the performance stage(s) as is reasonable. If not, instrument storage space behind the stage would be appreciated between sets (depending on performance setup). We can provide carts for instrument transport, but will need to know ahead of time if this is required.

Gate List: Gate lists will include all the band members listed above. For Faires we have support personnel that may assist during setup, to and from performance, and teardown. These people are “guild members” for the purpose of Renaissance Faires, and a list of names will be provided upon request. For the entire band, including support personnel, this may be up to ~12 people (typically fewer). For events requiring entrance tickets, approximately 6-12 comp tickets will need to be made available.

Merchandise: We have Gallows Humor themed merchandise to sell: 2 CDs, 2 styles of T-shirts with the band themed design, and stickers with the band logo. During most public performances we do accept tips from the audience, during or after the show. If there are any concerns with this, please let us know. For private events we won’t put out the “tip coffin” or the merchandise unless that is requested or appropriate. (Example: weddings, private parties or other events.)

Adult Content: While some of our more beloved songs, such as “Blue” or “Coffin” are for the adults, we have a large selection of “family friendly” songs: currently 24 performed by our current lineup. While we enjoy playing on 18+/21+ stages, we can tone it down and perform our tamer pieces when requested. Our humor is towards the spooky, dark, macabre, and we also have songs about drinking, how we are NOT pirates, and traditional Romani songs. We are always willing to adjust our content for the venue or event, or the needs of the customer. Please don’t hesitate to ask if the event is amplified or in a public venue not appropriate for adult content.

Go here for an interactive listing of our song catalog, including songs that haven’t been recorded. Lyrics are available for all original songs that we currently perform.